As snow continues to coat the roads in a cold blanket of white, Power Level Studios remains unperturbed by the elements and has been pushing forward with a fiery passion! Rather than going out and making snow angels, we've been enjoying our time huddling up to our fireplaces (i.e. computer exhaust fans) and adding new additions to the game! As exciting as it is to wander out into the below-zero wonderland, we have instead opted to bring the Winter landscape to you. Yup, that's right! Version 0.0.3 is ready to download, and Polarus is now available to explore! 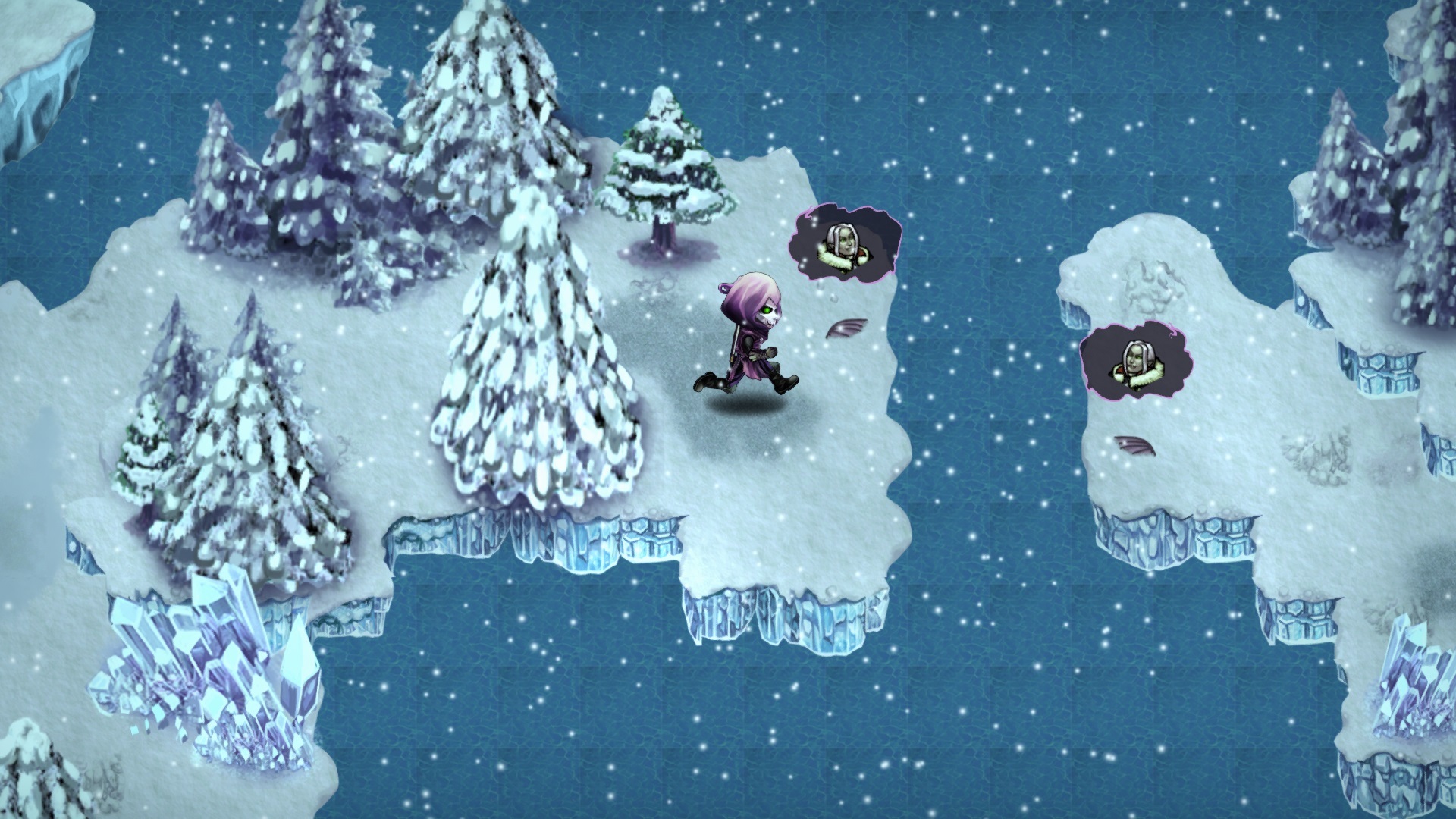 Polarus is the third and final layer of The Vault. Quite the "polar" opposite of Volcanheim, no?

This snowy plane takes no prisoners. Get ready to fight some of the most dastardly creatures around, and prepare yourself for Soul Reaper's toughest challenge yet: mathematics. 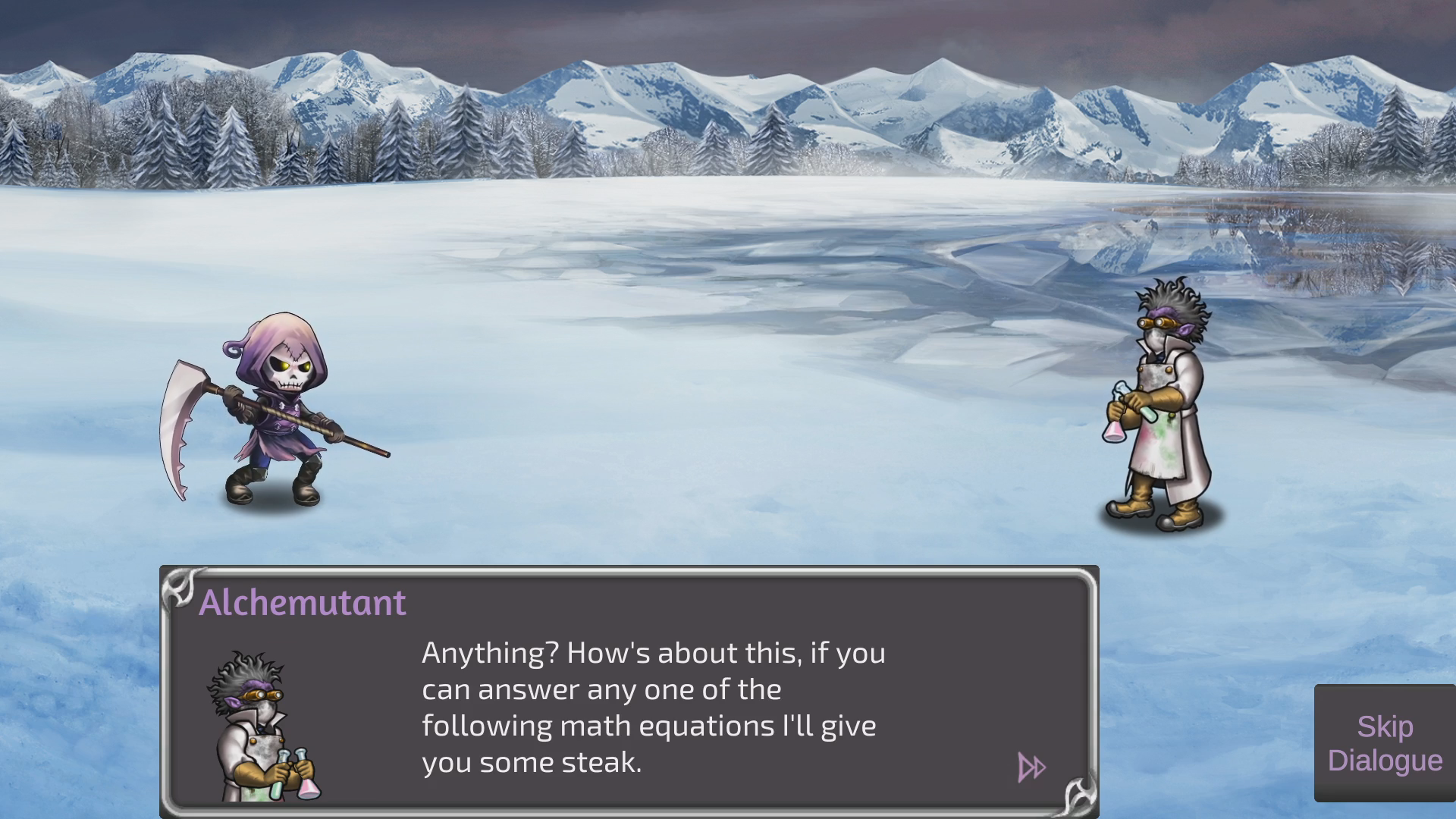 The Alchemutant is one of the final remaining boss souls available to capture. If you can't prove your mettle through math, then perhaps you can "persuade" him like you did the others?

The Alchemutant presents an interesting ability for those able to recruit the mad scientist. Upon finding an igloo on the icy field, players will be able to shrink down and retrieve treasure from the inside! 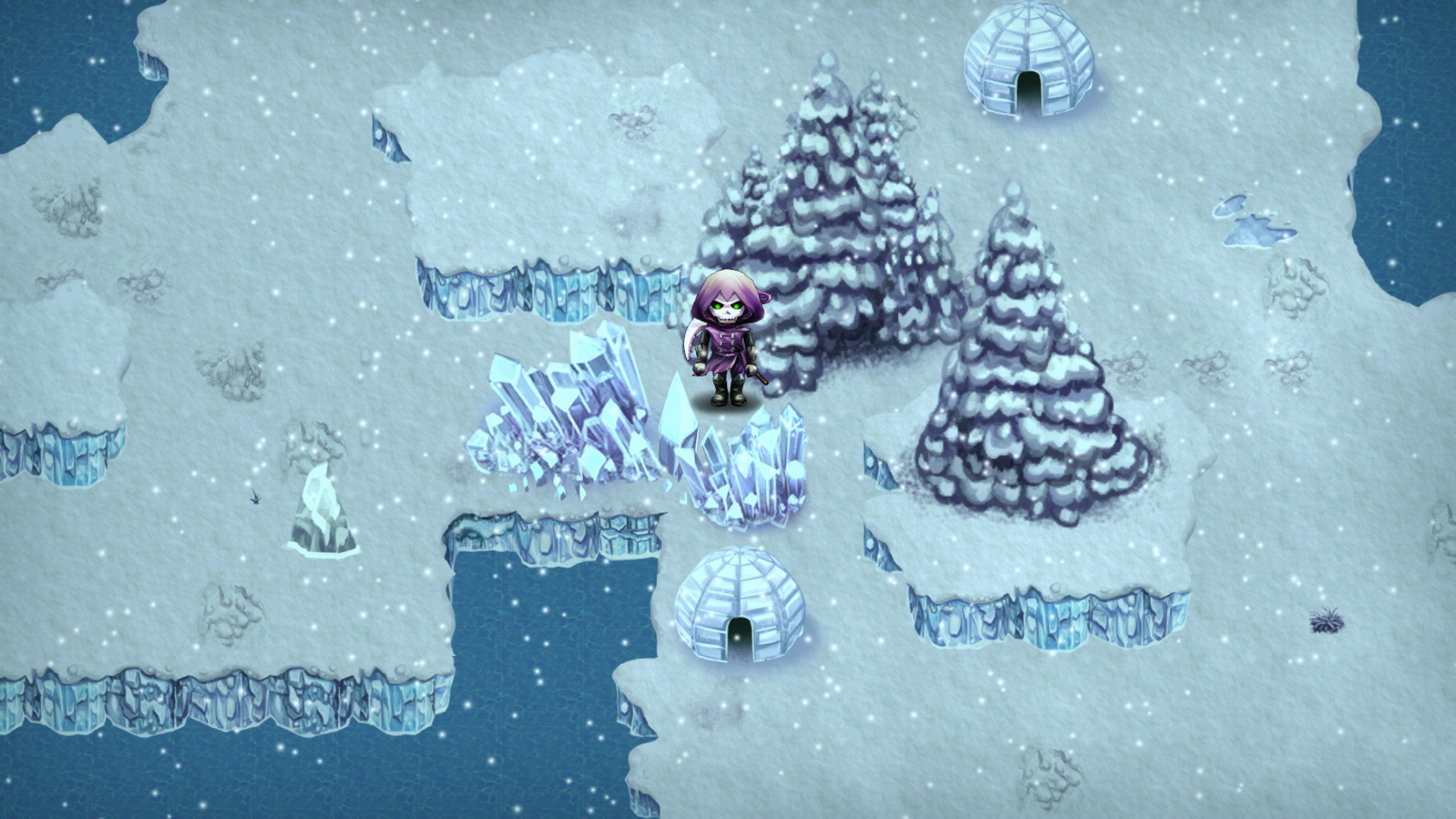 I wonder what those little guys are hiding? Only one way to find out!

That being said, it's important to remember that Polarus is one of the final locations in the game. It's going to be pretty tough to navigate through its monsters and terrain if you aren't prepared! If you're feeling a little lost, we recently added a Guides section to our website that details how to prime up your squads for combat! There's a lot of mechanics you can take advantage of in Soul Reaper, so give it a gander if you'd like tips on maximizing your effectiveness in battle! 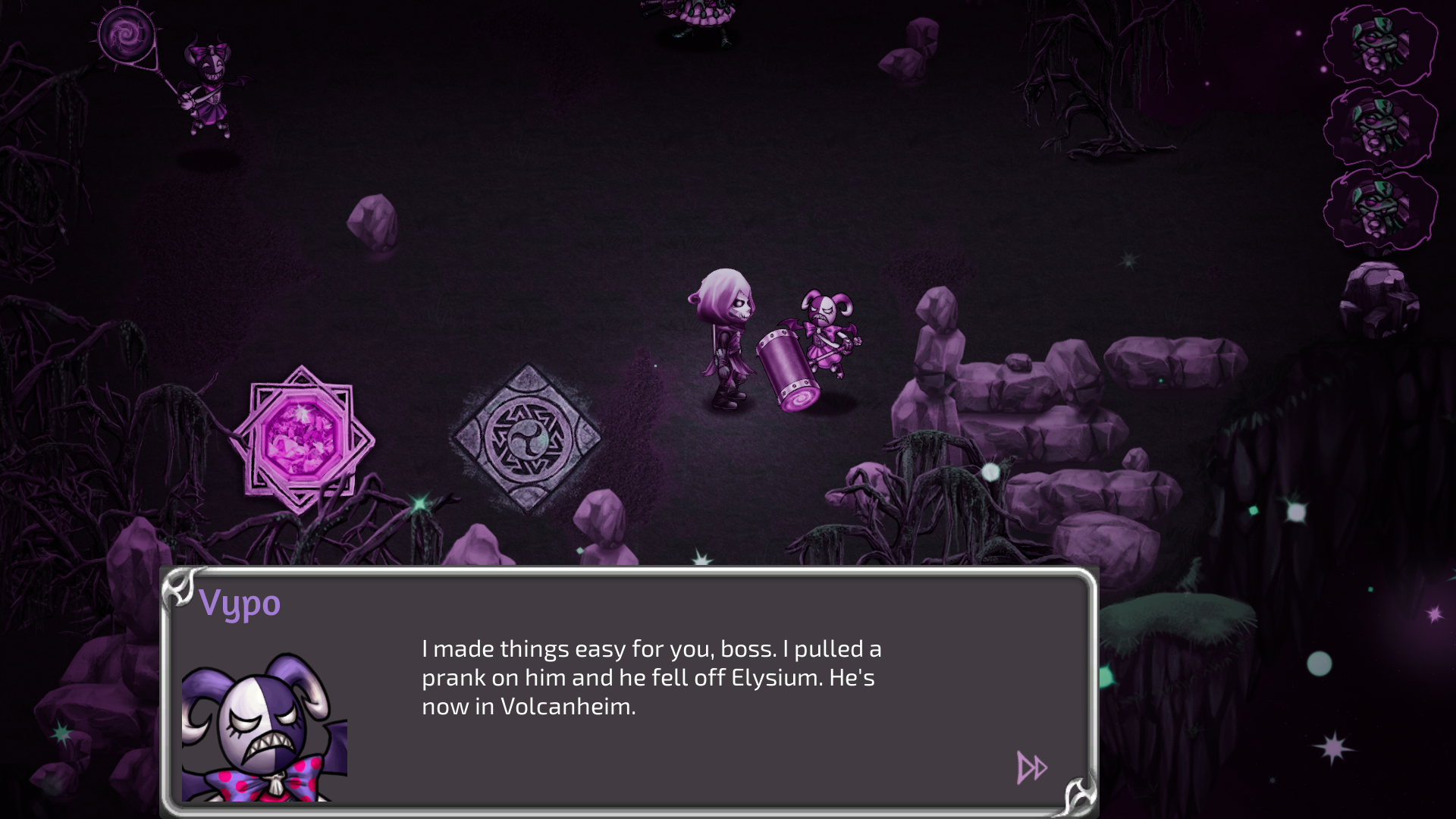 Of course, you can always talk to Vypo for guidance! He'll point you in the direction of new bosses to fight!

A Place For Everything, and Everything in Its Place

While Polarus is a fantastic addition to 0.0.3, there's plenty more to see than just a new area! One of the first things that will jump out to players is the new UI in combat! 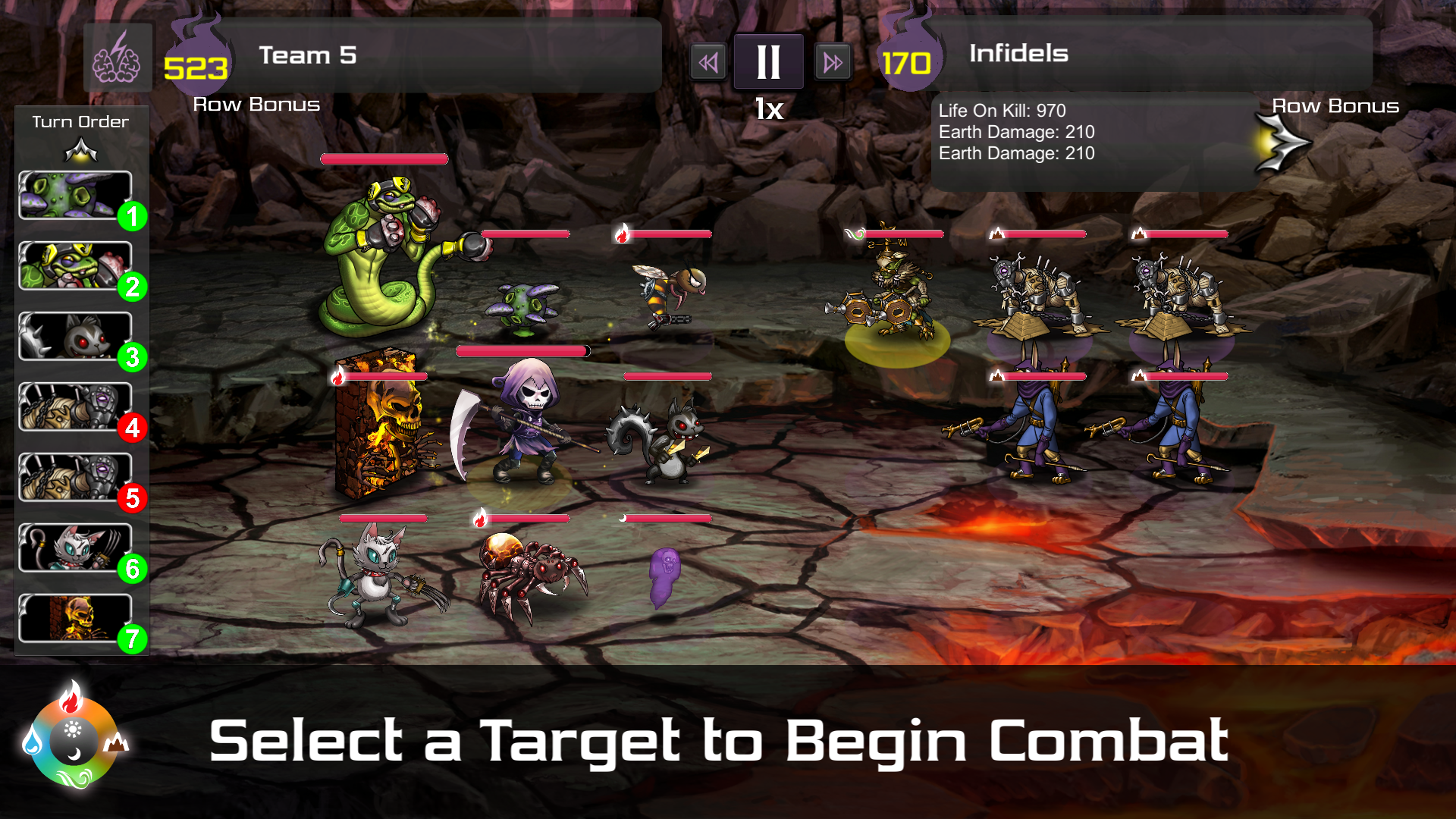 No longer will you need your Reapedia by your side! There's plenty of visual identifiers to reference on the battlefield, making it easy to know how to proceed!

For starters, the player's squad is now on the left side of the field! This has been a heavily requested adjustment, and we're pleased to announce its inclusion within the newest version!

Secondly, the Turn Order table is now prominently displayed across the left side of the screen. It even includes turns 6 and 7, which weren't previously visible in 0.0.2! This makes it far easier to plan ahead in battle, and should give the player a better idea as to when they should heal or attack.

Element types are also now visible! Creatures that aren't Poison or Neutral will now have their respective element displayed beside their health bars. This change makes it far more intuitive to plan out super effective attacks!

Finally, Row Bonuses are now displayed under each squad's name. Highlighting an enemy will pop up the bonuses currently being applied to their row, allowing players to quickly check what exactly they're dealing with.

As a quick reminder, it's great to arrange your units into rows! You'll share stat bonuses that way! For a thorough guide on harnessing these bonuses, check out our article here!

It's that time again! Below is another changelog compiled by Danny Forest that overviews both the major and minor changes found in Version 0.0.3. This man has been working around the clock to fix bugs while adding in new content, and we can't thank him enough for his incredible work! Without further adieu, the list of adjustments is as follows:

Quite the slew of changes, isn't it? Remember, much of these improvements wouldn't have been made possible without the phenomenal support from the community! You guys have been amazing with providing feedback (both on our Steam Forum and in private), and we can't thank you enough for continuing to submit bug reports via our submission document! This stuff helps a ton, and Soul Reaper's development is moving much more smoothly thanks to it!

The Animation Sensation (Trees, Pandas, and Puffers, Oh My!)

It's been a while since we've done another round of monster animations! Check out the groovy movements of the Commandapanda, Malignatree, and Needlypuff below!

A chill panda with an "enlightened" state of mind. This fella doesn't move, but it can emit some pretty powerful light waves from its stomach!

The Malignatree isn't the kind of "giving tree" I'd like to hang around… Beware those poison apples!

This fish shoots out arrows in any which way it can. Neat talent, but probably not what it expected when signing up for archery class. Those darn Snipines!

That about wraps things up for this update! Remember to check out Soul Reaper's Open Beta at powerlevelstudios.com/beta, and let us know what you think! Our Discord and Steam Community are the easiest ways of making your voice heard, but feel free to reach out to us via any of our social media links below! Stay tuned for further updates, and we'll see you fine folks next time! Remember to stay warm in this chilly Winter weather, and most importantly of all, have a good one!