Full Steam Ahead - All Aboard The Reap Train 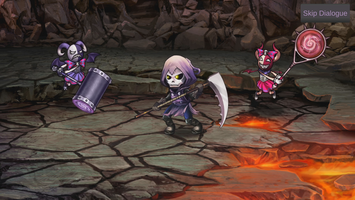 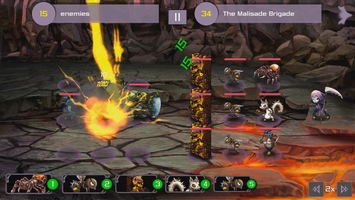 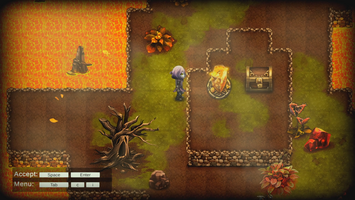 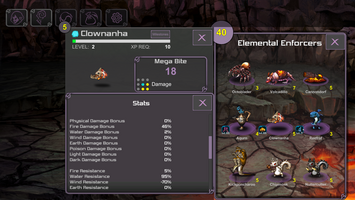 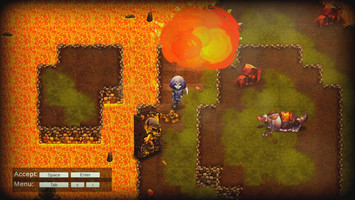 Full Steam Ahead — All Aboard The Reap Train

Power Level Studios is excited to announce that Soul Reaper’s Steam page has been approved! Development has been proceeding quite nicely thanks to our incredible team, and it’s amazing to see how close we are to Early Access! 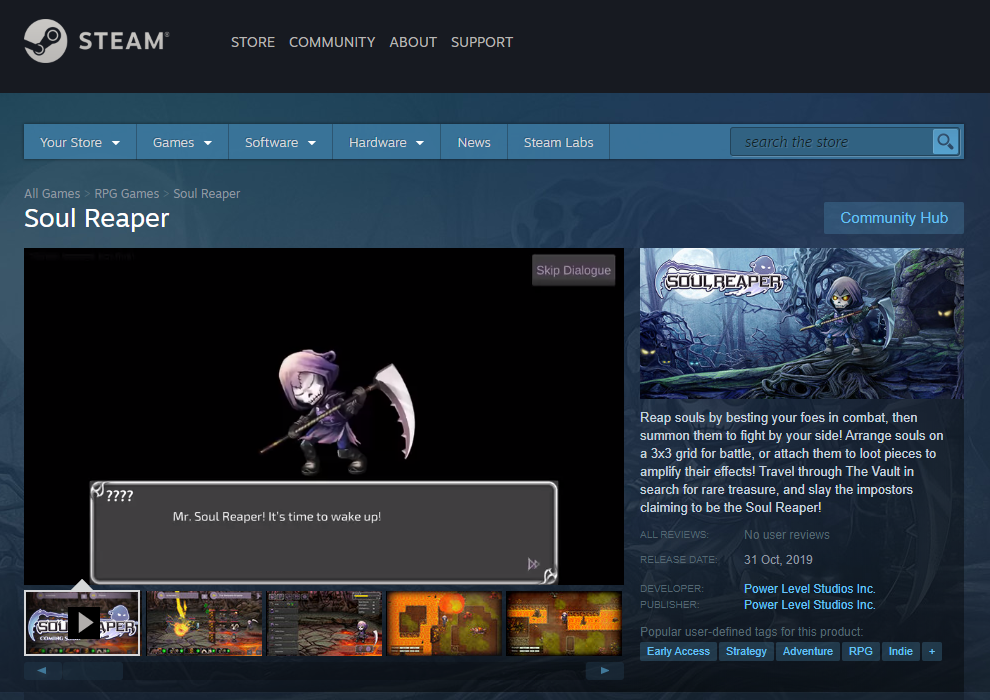 Here’s what you can expect from the Early Access build:

The Early Access period allows us time to polish certain aspects of the game while keeping a keen eye on user feedback. For example, we’ll be assessing what areas require balancing adjustments, adding additional story content, and fixing any bugs that crop up along the way.

With regard to balancing, we’ll be listening attentively to what the community has to say to help adjust the game’s difficulty. Some bosses/areas may not align with the pacing we expect the average player to take, and might need some revaluation should a number of suggestions come in regarding the same thing. Additionally, there’s always the chance that certain loot and monster combinations simply doesn’t yield the expected results (say, if a loot-set bonus isn’t actually being reflected within combat).

Regarding additional story content, there are more story elements we’d like to add in the final game. You’ll still have access to the main plot within Soul Reaper, but the narrative won’t be as fleshed out as it could be. Additionally, dialogue between characters might get spruced up or altered if we feel we can implement something better. Once again, feedback will greatly be appreciated in this area! If there’s a particular interaction between certain characters you’d love to see more of, please let us know!

Finally, there’s the topic of bugs. We’ve been ironing out any oddities that have occurred since September's Public Playtest (thanks again to those who attended, it was a great experience!) and have been on a vigilant pursuit ever since. However, we’re always looking at our game with the same pairs of eyes each time. Having non-developers play Soul Reaper will bring fresh perspectives and play-styles… and probably a few “discoveries” that we never stopped to think about! With any new game, there’s always something that the community manages to unveil that surprises the team behind it! If there’s any mind-numbing or world-warping bugs that interfere with your soul reaping experience, then get in touch with us and we’ll have it fixed ASAP!

Shooting The Messenger (A Message!)

There are a number of ways to get in touch with Power Level Studios during the Early Access period. The easiest method would be to DM our Community Manager (that’s me!) on Discord, which you can find here. We also have a #bug-reporting channel you’re free to use to discuss any oddities you’ve encountered.

If you don’t have Discord, feel free to contribute your findings to the Steam Community for Soul Reaper. It’s a little barren at the moment, but Benign will begin making some posts later this week. Expect to see a large bug reporting thread up there sometime soon!

Oh, and there’s always the Contact section on our website! This will shoot a message to our support email, and we’ll get back to you when we can!

Back in the Spotlight! 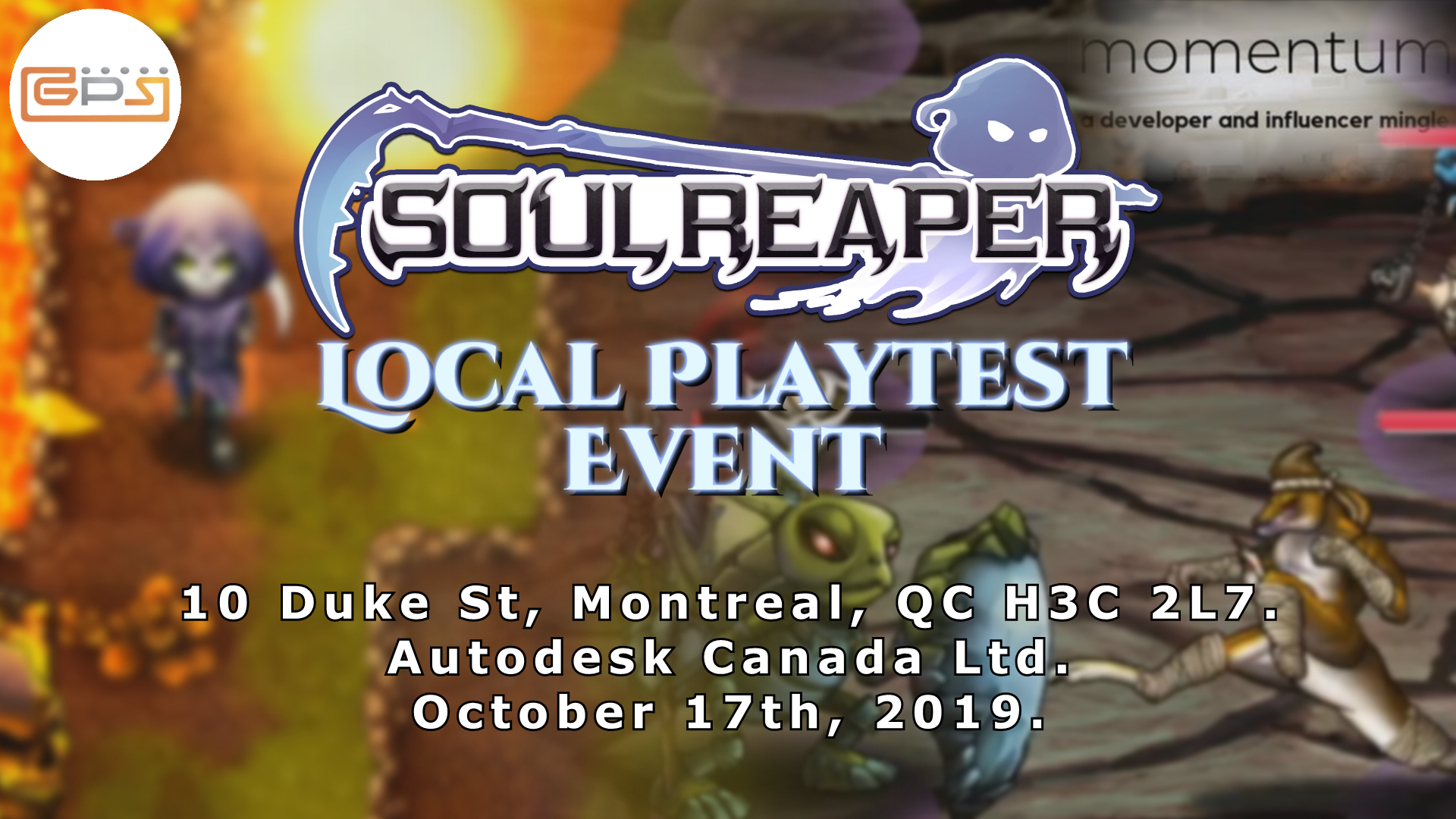 We’ll be having another public playtest for Soul Reaper later this month! Power Level Studios will be attending Momentum, a networking event in Montreal for influencers and developers alike! We’ll be letting attendees get their hands on the most up to date build of Soul Reaper, so feel free to sign up! Admission is free, but you’ll need to register on the event page in advance, here. We look forward to seeing you there! 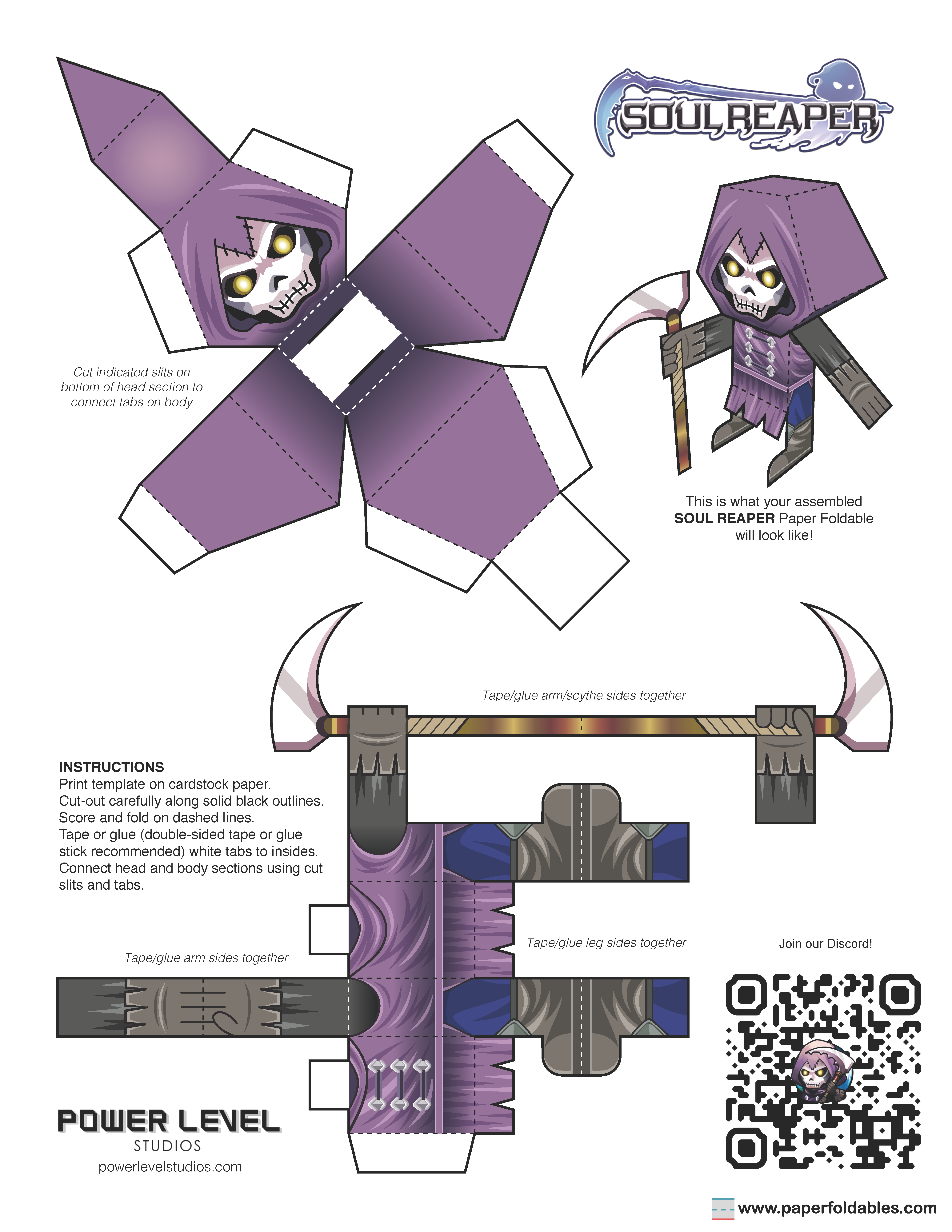 Did you know that we have a special printout of the Soul Reaper? Yup! It’s a foldable figurine made by paperfoldables.com, and Benign is going to walk us through his very own building process! 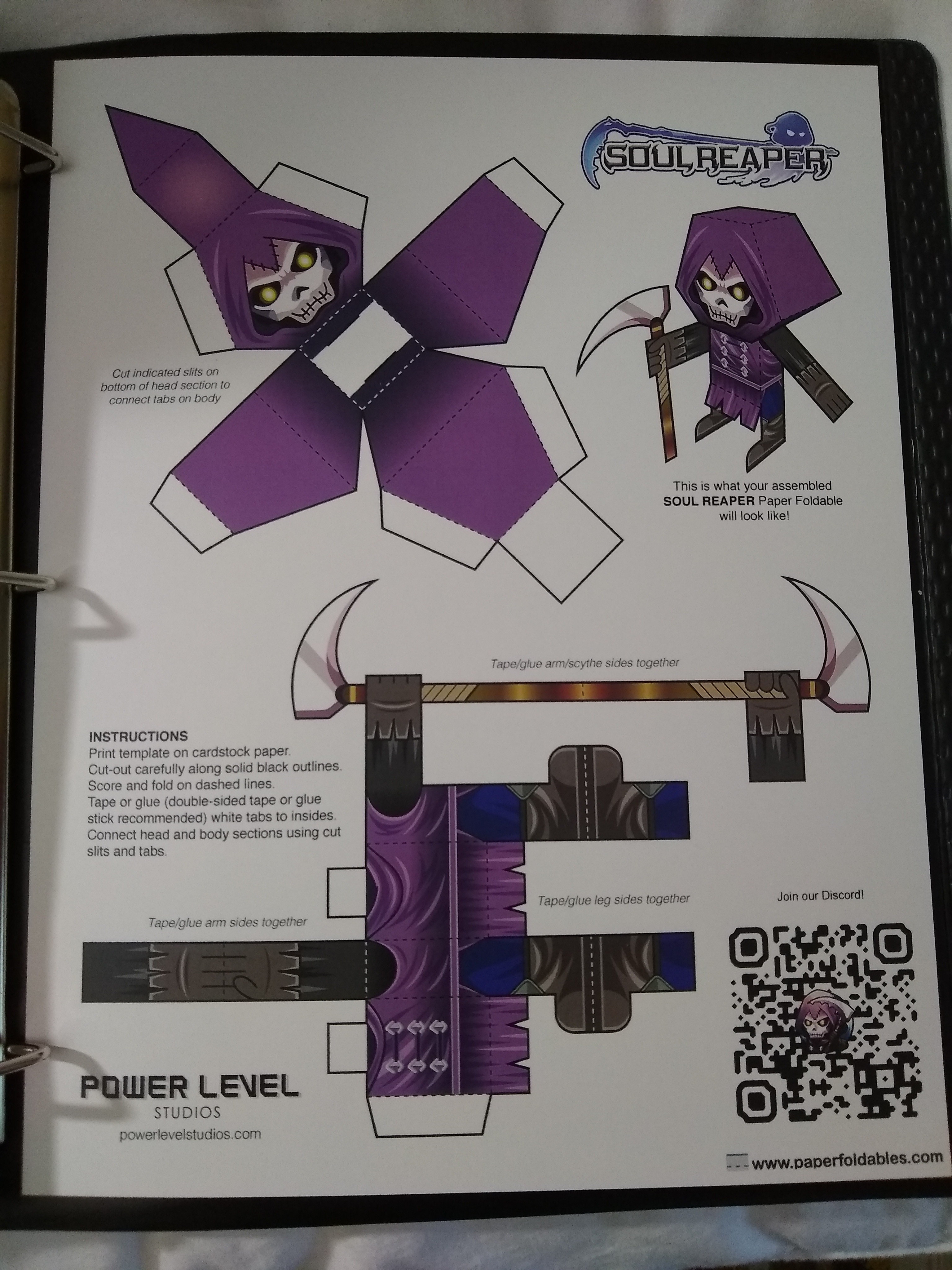 Pretty cool looking! (I also need to shout-out “Snhex” for adding in the Discord QR code. He’s one of our programmers, and it was quite the welcome addition!)

Alright, let’s get to cutting… 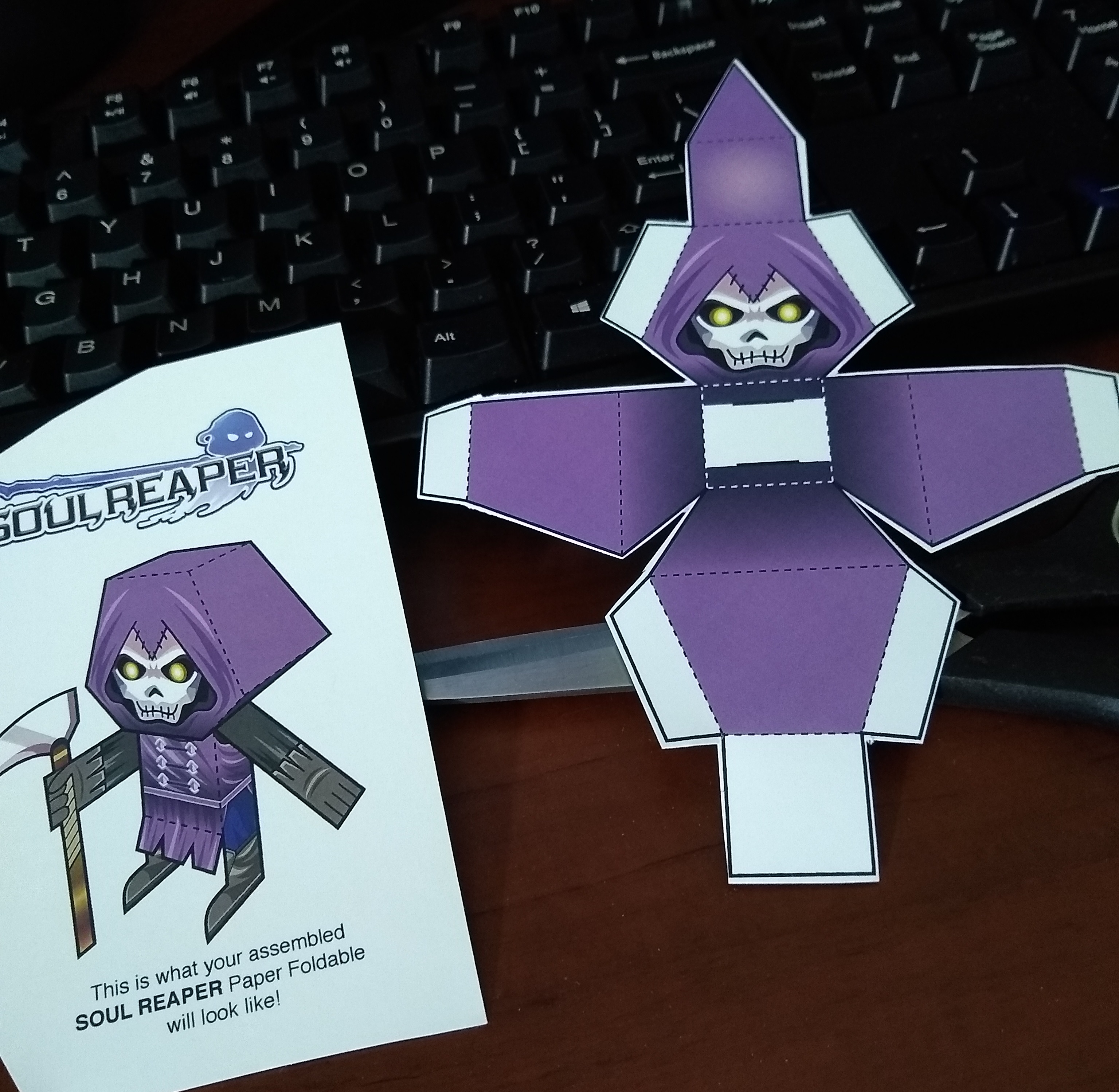 Okay, kinda neat! However, Benign, aren’t you supposed to cut along the lines, and leave out the white… 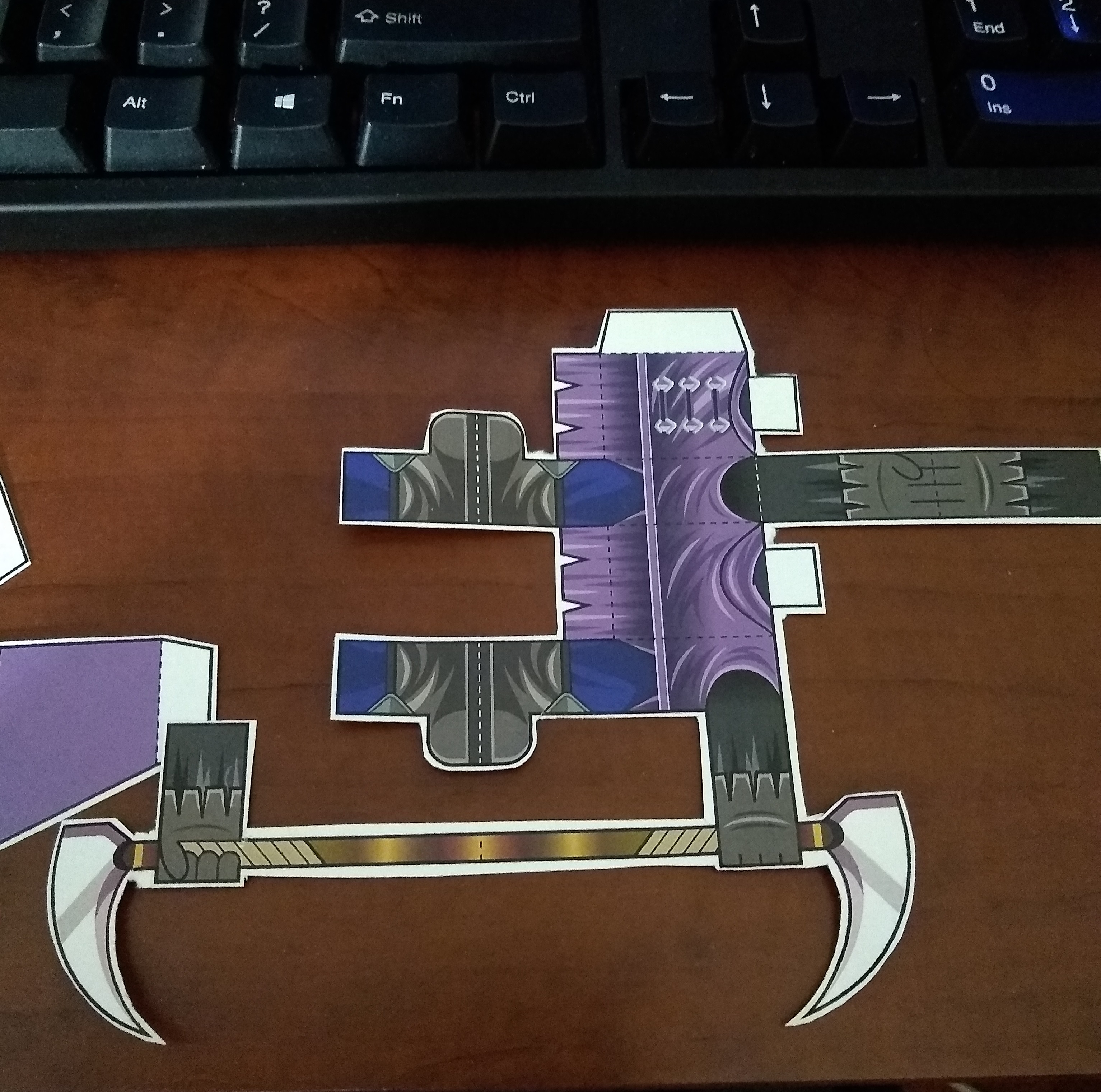 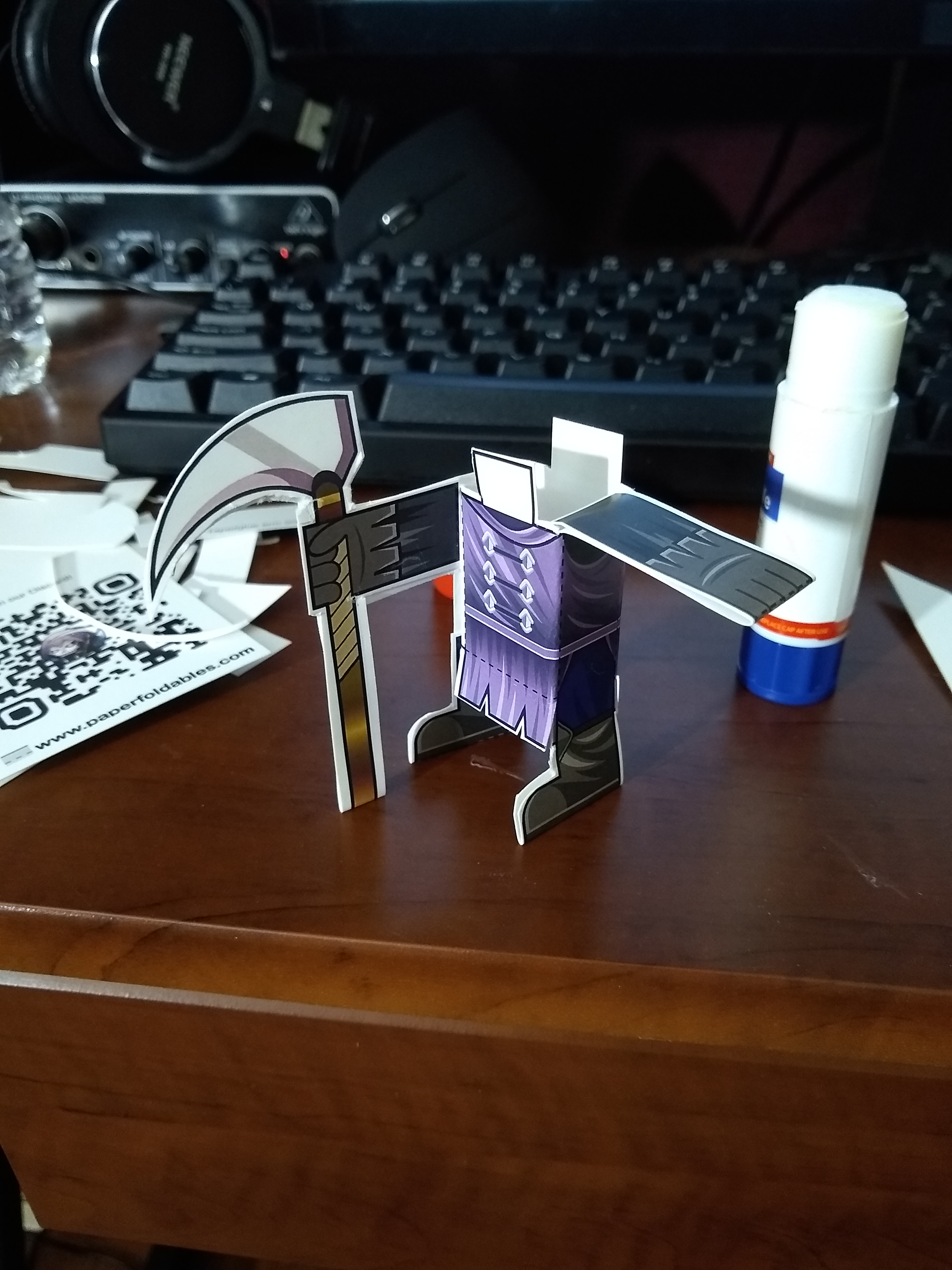 Oh, so that’s what it looks like all folded up! But wait, shouldn’t you make sure his body is more… “Closed-up?” 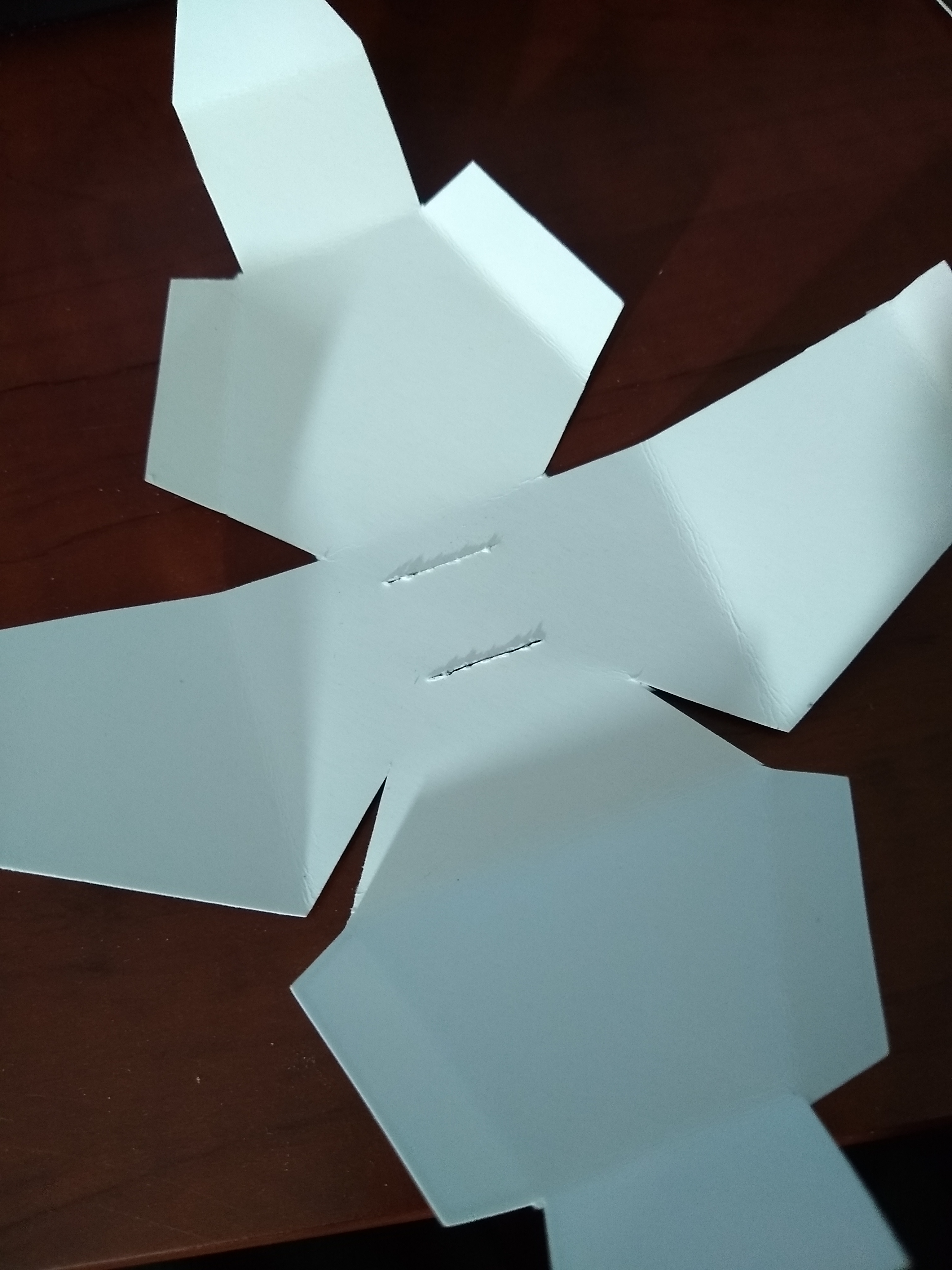 Uh… Things are moving along, I suppose. Let’s see you put that head on straight! 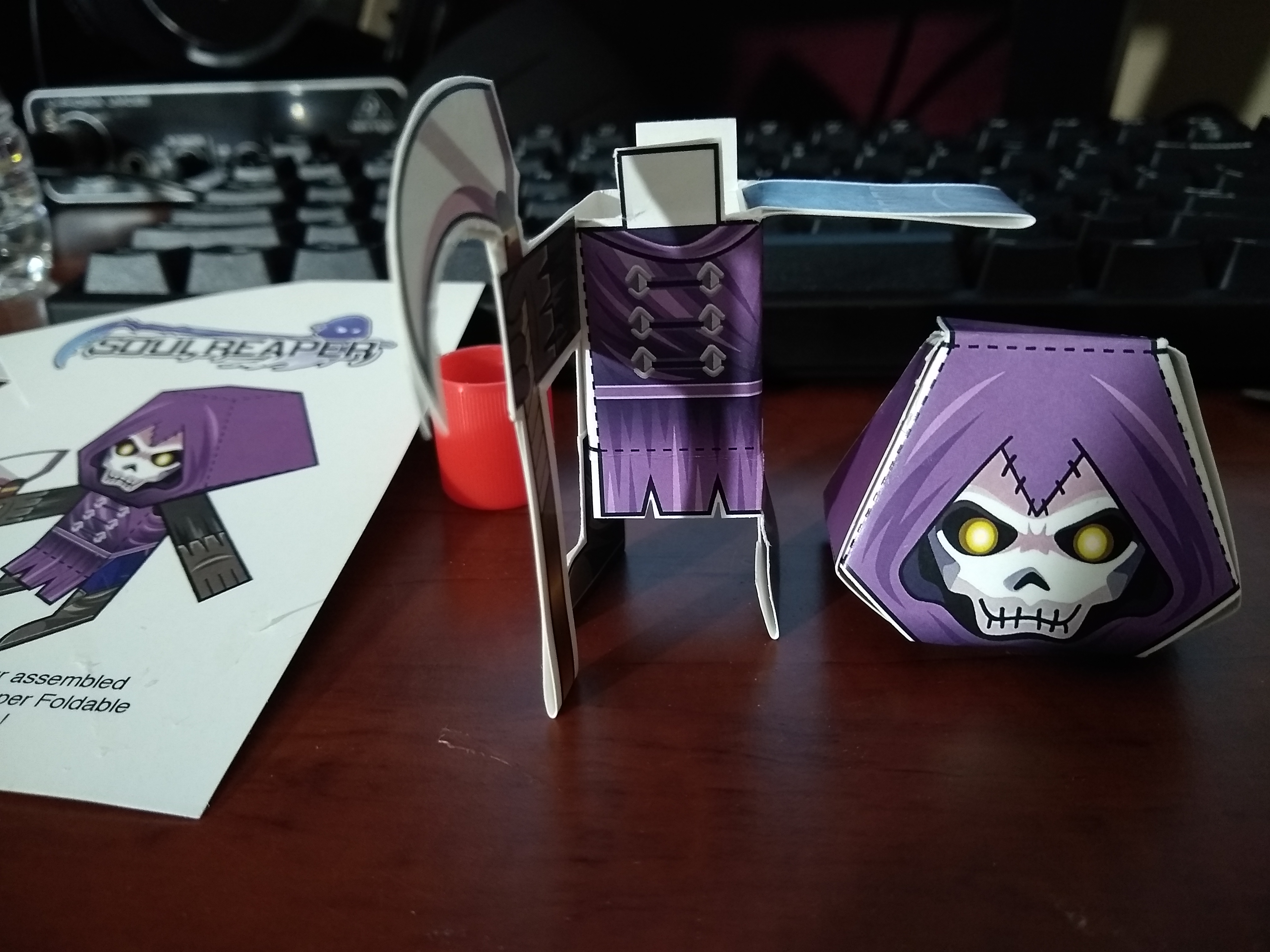 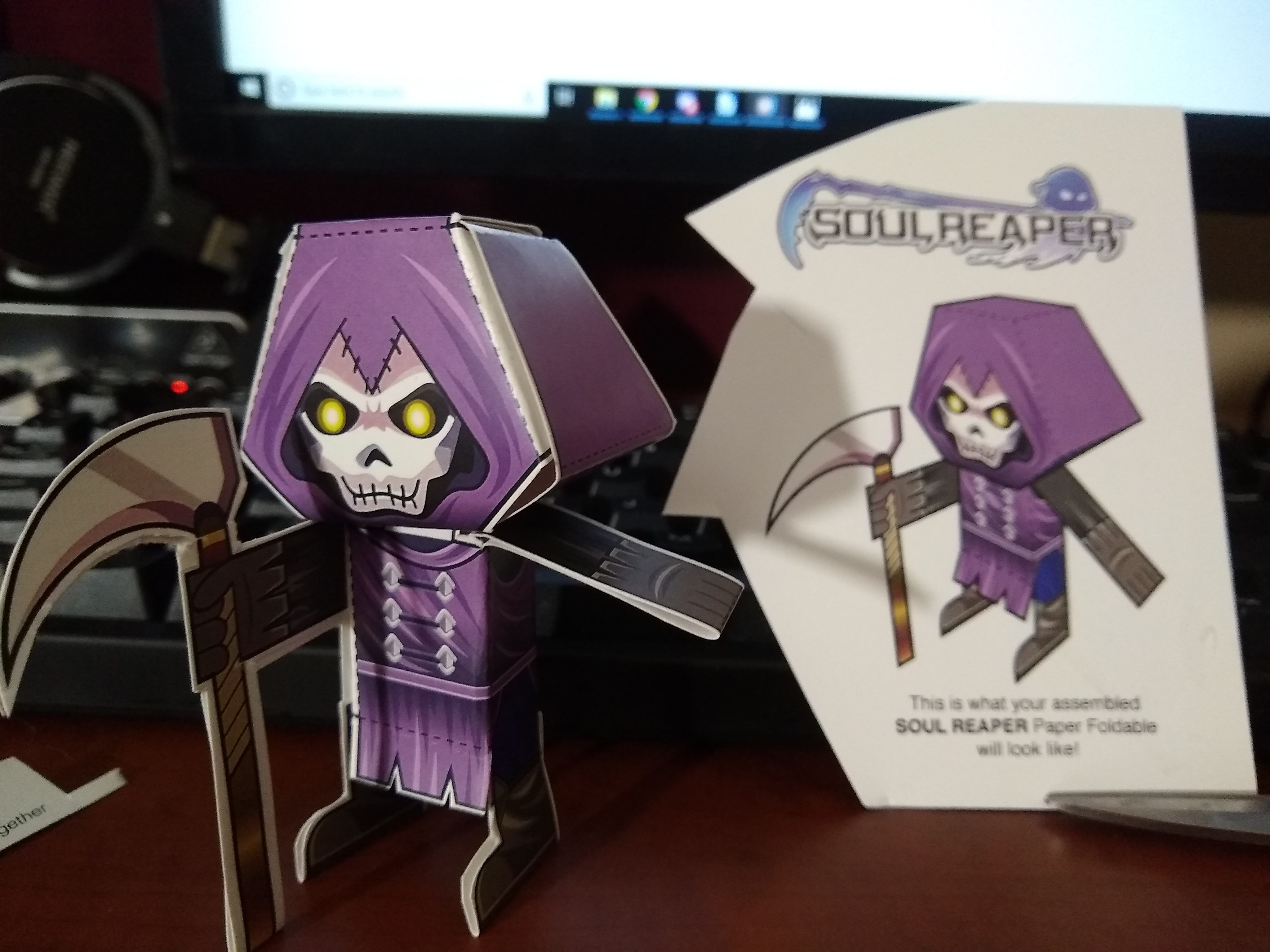 Okay, not too bad!

Well, it appears that having a hook for a hand has prevented our very own Stabbytabby from making a clean cut. While the attempt looks decent, it can certainly be improved upon.

The question is: Can you do better?

Do you consider yourself the artsy type? Do you miss the feeling of glue sticks and paper crafts? Would you like to win a Steam key for Soul Reaper? Well, have we got a deal for you!

Power Level Studios will reward a single Steam key to each of the first 5 individuals who produce a better paper figurine using the attached printout. By “better paper figurine,” it simply has to look more presentable that what Benign has produced. Hence, try to get a cleaner cut (leave less white space by cutting along the black lines), and try to prevent white tabs from sticking out (glue or tape the connecting points better than Benign did). The closer your Soul Reaper figurine resembles the stock image provided on the paperfoldables printout, the better!

Whew, that was a lot of writing! Well, I hope you folks have fun with this! It was pretty neat breaking out the old glue stick that somehow still works from high school… Oh, and be careful not to get any paper cuts!

That’s all for this update! As always, feel free to swing by your favourite social media platform of choice to stay updated on all things Soul Reaper!